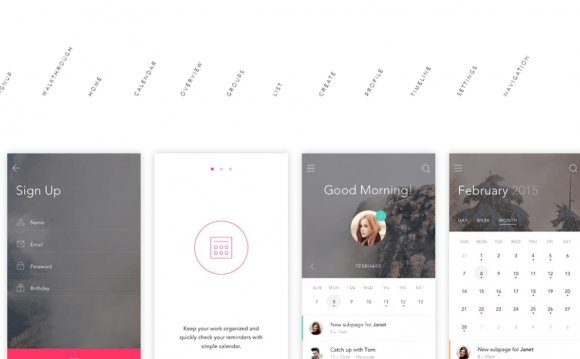 So which trends, technologies and techniques will define 2015? net magazine set out to uncover them by asking 20 of the web's brightest designers, developers and thinkers.

Here's our list of 2015's defining trends. Some ideas are featured in net magazine's feature. Most contained here are exclusive, and you won't read them anywhere else.

Front-end developer Benjamin Hollway expects more massive background images in 2015, "used alongside rich typography and subtle parallax effects", largely due to the lead taken by massive brands such as Apple and Google Nexus.

Creative director Haraldur Thorleifsson says card-based design will be big: "Content needs to fit on different types and sizes of screen, and cards are the easiest way to make that work across platforms." He adds this presents a design challenge, since cards can be dull, "but we're seeing fun, clever takes on this from companies like Google".

Clearleft founder Andy Budd (clearleft.com) says "as more companies realise their customers' primary experience with them is online, we'll see more digital-first-approaches to branding". He predicts companies "ditching traditional branding agencies who treat the web with the same care as a branded mug", instead "commissioning digital agencies to conceive a brand that works first online before filtering down to other channels."

Ghostly Ferns founder Meg Lewis (darngood.co) adds this may result in "more brands with responsive, fluctuating logos, " which will "force designers to think about a logo from 'big picture' to 'minute detail' as it scales".

Sally Jenkinson says open data's been on the rise, but many digital spaces remain "more closed than ever" and so "leaders such as The Open Data Institute are working to promote more openness". She reckons this will gain public awareness in 2015, and projects will respond accordingly, in terms of publishing and consumption.

Clearleft's Andy Parker says we'll therefore see "more public and private companies making data and content available". In turn, this will result in "some pretty spectacular services being created, like the Cern sandbox".

But others see responsive design going further. Jonathan Smiley (jsmiley.me) thinks we'll see "responsive design practices become more important in native apps, " in part through a proliferation of wearables. "Apple Watch, for example, relies on a responsive-like flow to accommodate a small screen, and so while 2015 isn't the year the web and native become the same, it'll get us much closer."